Younger Self, Older Self

Penelope talks SO much. And while the things that are flying out of her mouth are hilarious, I love listening to the inflection in her voice. I find it fascinating, listening to her experiment with how she speaks, and where she puts the emphasis in her sentences so that it all sounds super passionate but also just a little bit off. Basically, it sounds like there is a miniature Christopher Walken in our house at all times very intensely discussing things like Legos and PJ Masks.

I haven’t blogged in a while, but that’s not for lack of material. I am constantly recording notes and starting documents of all the things I want to say but between these two little monsters I haven’t been able to sit down and F-O-C-U-S enough to make any sort of sense.

But the one story I really want to tell you about is the day I loaded up both kids in the stroller to go for a nice long walk to our neighborhood park. Sounds simple enough, right? Just a mom, with her two kids, headed to the park?

If you would have told me even just 3 years ago what it would take to get two small people out of the house to go anywhere at all, I would have thought you were lying. Or at least exaggerating. Or high. Probably all three. But come on, it can’t be that difficult, right?

It requires all sorts of planning and timing, and shenanigans of bathroom breaks and water bottle re-fills and dressing (and re-dressing) and contraption assembly and coaxing…it’s exhausting even thinking about it. This is why people with small children don’t leave their homes very often, and also why they go slightly insane.

Ciro isn’t much of a napper-on-the-go; he really likes his crib. But I decided to break that habit because he naps a lot and I want to at least be able to have him nap in his stroller on the way to the park so we can get some fresh air. So I went through the whole ritual of loading them up and getting them going, listening him fuss the whole twenty minute walk over because he can’t fall asleep and he hates his stroller seat and if he had the dexterity would probably grab a pack of matches and light it on fire to prove his point.

We got to the park, and Penelope proceeded to run everywhere and swing on everything and beg me to come join her, but I couldn’t because I had a grouchy overtired baby I needed to help fall asleep.

So I began running around the perimeter of the playground pushing the stroller, trying to hit every bump and wood chip (because seriously, the motion works) to help him into la la land. It took me forever and I probably ran about forty laps, but it worked! It finally worked! (Either that or, let’s face it, he may have just blacked out over the realization that this is his life.)

As I walked toward Penelope, with Ciro dozed off in his stroller, it crept into my mind what my younger self would think if she drove by and saw me right now.

Imagine I told her it was her? That she was my Ghost of Motherhood Past?

There she’d be, cruising along in her black Neon (when she should really be in 9th period, ahem), smoking a cigarette, on her way back from Dunkin Donuts. She’d be listening to the newest CD she picked up from that guy at the flea market who always had all the best and newest music that no one had heard of yet. She’d probably glance over and see me, and think, “Aw, what a nice lady taking her babies to the park! Even though she appears to be slightly insane running in circles like that, it looks really peaceful.” She’d probably also think: “It will be FOREVER before I have children” and then she’d turn up the volume on her radio and take another drag of her Marlboro Light.

She’d be floored to find out that I now drive around with an Elmo potty in my trunk, and that earlier this morning I accidentally squirted myself in the eye with my own breastmilk.

My older self – The Ghost of Motherhood Future – now she’s the one I think about much more. What would she do? She would probably take me by the shoulders and shake me, her younger, less-wrinkly self, and yell things like CHERISH THESE MOMENTS and YOU DON’T EVEN KNOW HOW I MISS THOSE DAYS!!! and THIS ISN’T EVEN A BIG DEAL; GET IT TOGETHER, WOMAN!

And as much as I’d probably not want to admit it, I’d know she’d be right. Sometimes I wish I had these two hanging out with me to bring me some perspective. Or at least, to pick me up an extra cup of coffee. 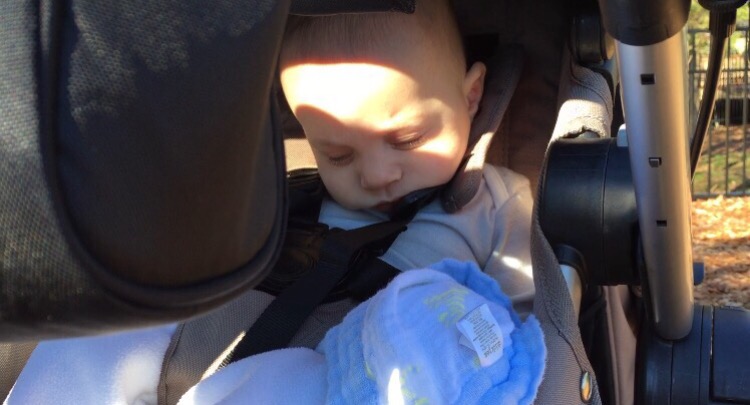 I just love your articles, I see myself in this one, you are an awesome writer my second daughter. Love you

Thank you Lydia! Your comment just made me weepy 🙂 Love you!