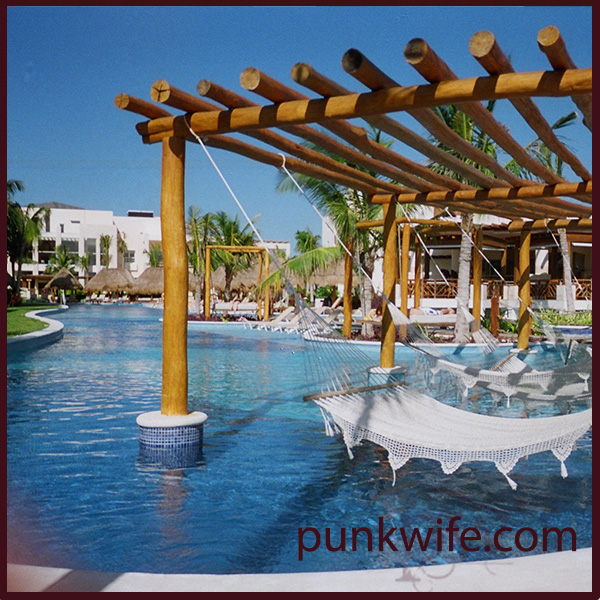 We were in Mexico. I was floating on a soft, cushy water pillow down the ‘lazy river’, the kind that weaves in and around the resort and spa, the kind that makes you forget that there is any other place in the world or any work to be done. The air was breezy and cool on my skin, and I could taste the ocean water that was mere feet away. As I slowly floated by I cracked one eye open slightly. I saw a crystal blue sky, palm trees, and caught a glimpse of the condensation dripping down the Corona in my hand.

It wasn’t an every day scene, but the fact that we were able to save some money and take a vacation like this, where we could float down a lazy river with a drink in our hands and mariachi music playing off in the distance, no idea where we were going or what we were doing, our biggest concern being where we felt like eating dinner – it was a little slice of heaven.

That was four years ago.

Lately, the days are loud, loud, LOUD, with a whole lot of movement, a whole lot of action, and not a whole lot of sense. But every once in a while, it gets quiet. I’ve talked a lot about the shit-show, and the madness, but I don’t think I say enough about the points among the chaos where I feel it: that strong surge of mad, insane happiness. When I can settle myself among the noise, just for a few moments, I can hear it, too.

Yesterday afternoon, I sensed it again. Ciro was occupied and calm, exploring some instruments on our floor, and Penelope had run herself exhausted after a full-blown dance party before collapsing into a heap the couch. I had a soothing music station on. I lay down next to her for a moment, closed my eyes, and relished in the fact that things were quiet for a minute. I stroked her hair, hummed along to the music. When she’s feeling affectionate, she does this thing where she takes her stuffed Rabbit’s ear and drapes it over my shoulder, or Ciro’s head, or Greg’s arm. I suddenly felt it on my cheek.

I think about the lazy river a lot. I think about it when things get tough and intense at home, when I feel like I’m in desperate need of a vacation. I think about it during the days when I’m so tired my eyelids hurt. When I don’t know whether it’s Tuesday or Sunday or May or August. But in a very different sort of way, I’ll often sense that same feeling I had when I was floating down that lazy river. Still not knowing where I’m going or what I’m doing.

And still wondering how we could be this lucky.