What Happened When Our Son Wore a Dress in Disney

He looks to her when he’s scared, when he wants to play, for reassurance, and for pretty much everything. He thinks the world of his sister.

Which leads me to what happened in Disney, when we took a recent family trip. “Pack the costumes,” my sister advised. “Penelope is going to see all those kids wearing them to meet the characters and she’ll want to wear hers, too — trust me.”

We had a day planned: first, breakfast at the castle with Cinderella, then, off to meet Mickey. When Penelope reached into the bag of costumes and asked to wear her Cinderella dress (since she was literally going to meet Cinderella), Ciro was 100% GAME ON.

And hell hath no fury like a two-year-old boy demanding to wear a dress to meet Cinderella.

With his little face lit up with sheer excitement and determination, he brought me the Alice in Wonderland Dress, and waited for me to help him put it on.

I see it pure and simple: he is playing, he is full of joy, he is happy, and he is safe. Outside of that, I have zero concerns.

I know people have their opinions — some very strong — about children dressing a certain way. But that’s all it is: a personal opinion. And if someone is uncomfortable about an outfit choice of a child, I think that says more about that person’s own insecurities than it does about the child. I wasn’t about to make our son sad in literally the happiest place on earth because I’m worried about other people’s perceptions.

As a parent I’ve learned to soak the moments up while they last because they are gone before we know it, and I don’t want to waste any time making them feel bad about the things that bring them joy.

And, speaking of pure joy… 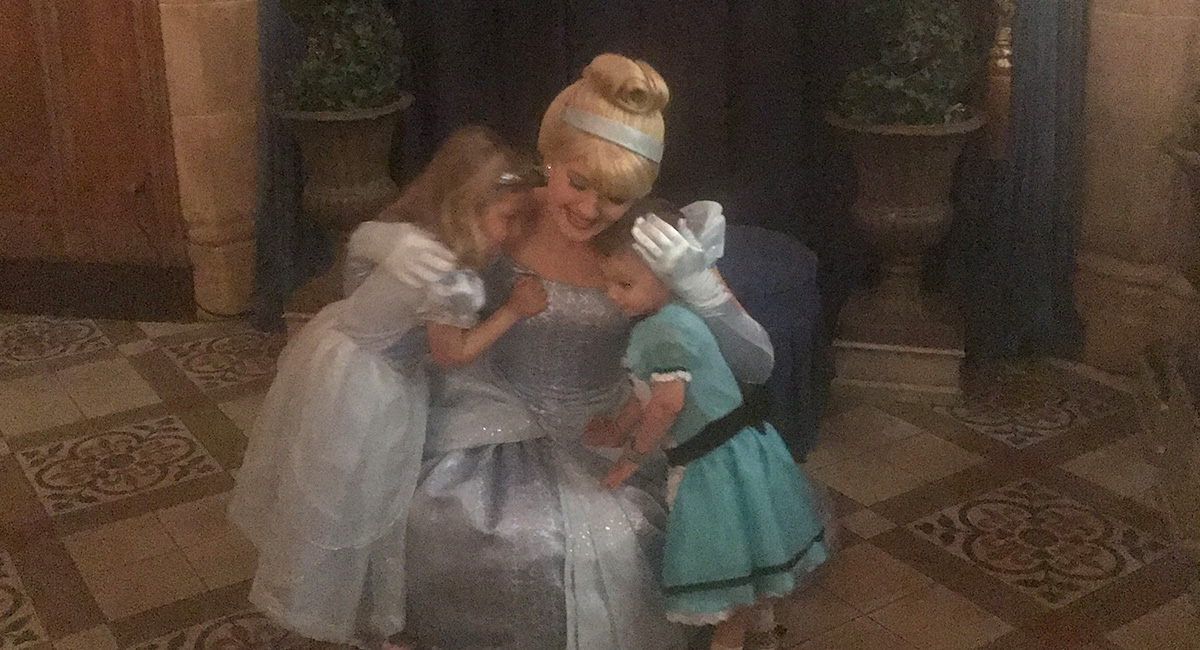 Trucks, dress-up, pink, blue, and everything in between; when it comes to playing together, the two of them find the fun in all of it. And yes, I do want my son to play with dolls, especially if it encourages him to be sensitive, nurturing, caring, and to express his emotions in a healthy way. THAT is the true definition of a strong individual. Most importantly, I want them both to know that we love them no matter what.

But really, this is about our daughter, too.

She is razor-sharp, our daughter. You can literally watch her dowloading the world around her; she doesn’t miss a thing. She’s also a leader, who is not afraid to take control. Aren’t we all born that way, us girls? Then somewhere down the line, little by little, that confidence, that edge, becomes less and less sharp, like a rock that’s been pummeled by the sea. It may appear smooth on the outside, soft enough to hold in your hand, but make no mistake: it’s from years of erosion.

As she grows older our daughter will find she may be praised when doing things that boys “typically” do, like play with trucks, change a tire, excel in a school subject considered more male-oriented. But she’ll soon find that when her brother participates in something that she values, something that is considered “girly,” he might be ridiculed, or not even allowed to do it at all. She may change her behavior or second-guess herself or her self-worth, because these messages, that’s what they do over time.

I’ll never forget when I was pregnant with Penelope and had just found out we were having a girl, and a male co-worker said: “Guess Greg couldn’t put the stem on the apple, huh?” and the countless others that said, “Too bad, Greg – you’ll have to try for that boy next time!”

In many ways, she may learn her value goes up acting “like a boy,” and her brother’s value goes down acting “like a girl.” Even well-meaning friends and family members might cringe or attempt to push his attention somewhere else if they see him pick up a doll or play with something that belongs to his sister. The message is clear. And these kids, they are sponges.

I’m thankful that tides are changing, and that both men and women are shedding that old mentality. Our girls are kicking butt! Our boys are sensitive! We’re praising boys and girls, men and women, for who they are as people and not based off of their anatomy, and it’s ALL GOOD. But large parts of society will still portray that outdated message and our kids will absorb it. I can’t control that, but never ever will they get that message from us, and I’ll take every opportunity I can find to build them both up as much as possible.

And so, Ciro wore the dress. Greg may have had to drink an extra mimosa that morning, but he powered through. Ciro was so happy and having so much fun, that while we waited to meet Mickey he was literally flipping over the velvet rope with the dress up around his shoulders, which is also a clear indication that he will never ever be a lady. And it’s all perfectly okay with us.

“Ciro is awesome!” Said the line attendant to her co-worker, when it was our turn to enter the room. We saw the other attendant wink back, and in we walked to meet Mickey.

But then, something magical happened.

After meeting Mickey, they have you exit through the gift shop (conveniently). I told the kids they could pick out one stuffed animal each. When we went to pay, we were informed that the items were free. “Complimentary for you today!” said the smiling attendant. “Is there anything else you’d like to do?” When we sat there, stunned and slow-blinking, he said, “Have you met Tinkerbell yet?” He then whisked us off to meet her, past the line of people and velvet ropes.

Greg and I wondered later that night: what brought us to VIP status? Why the special treatment? I mean, I know Ciro was acting like a total clown, but he’s always like that, so nothing new there. And then it hit me: it could have been the dress. Proving what most ladies already know: that sometimes, the right dress really can get you into the exclusive clubs.

*Disclaimer: This post is not in any way affiliated with or sponsored by Disney. This was our family’s experience. That aside, we were so impressed that throughout the entire trip we saw how Disney truly welcomes everyone, and holds tight to their motto: “The Happiest Place On Earth.”

**Bonus family fact: The irony in all of this is that my mother-in-law used to dress my husband, Greg, up as a girl for Halloween each year. He is a twin – the second-born twin, with one older brother already. This was pre-ultrasound days, so she had no idea what she was having; but since she already had a boy she just hoped at least one of the twins was a girl. Mike came out first, and while she anxiously awaited the second with dreams of all things pink and frilly, out came Greg. (Spoiler alert: she loved him anyway.) The running joke is that she dressed him up as the girl all those years because she thought he would be one from when she was pregnant.  She even made him Minnie Mouse one year. If only I had a photo of that to share. Oh, wait… 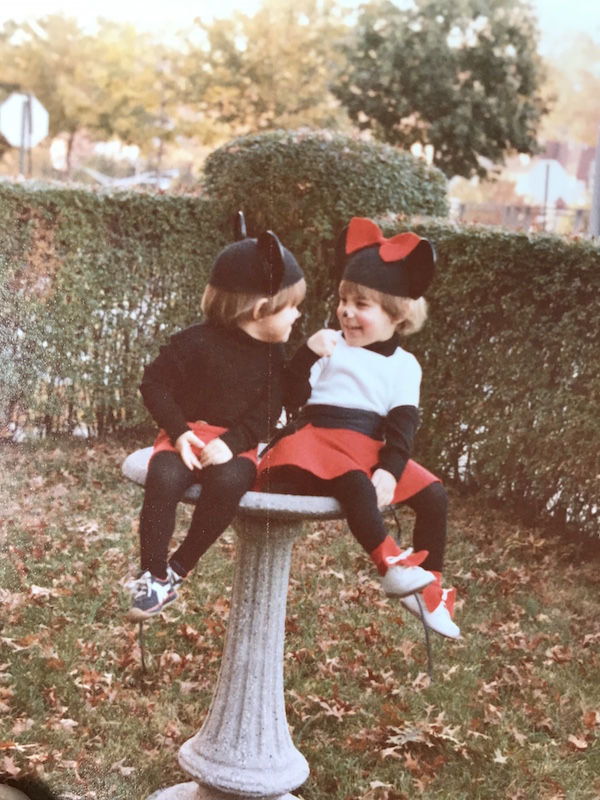 I’ll let you guess who the one on the right is. (Photo credit: my mother-in-law.)

Minnie is a very lucky guy! Thnk you for sharing this lovely story about your family and your unconditional love for those gorgeous kids! Have a geeat summer.
MC

Thank you Michael! It’s so good to hear from you, I hope you’re doing well! 🙂 I hope you have a great summer, too.