Waking Up in Rome

My father remembers from his childhood the day his mother caught him skipping school. Each morning he’d leave his home in the small Italian mountain town of Introdacqua, Abruzzi. But instead of going to class, he’d wander into the local billiards hall in the next town of Sulmona, where he’d shoot pool and smoke cigarettes all day with his friends. They were fourteen years old.

He’d been keeping this routine for a while now, but this particular day, his mother – Nonna Tina, as we knew her – caught wind of it from his teacher, and was awaiting his arrival at home.

Oh, was she awaiting his arrival at home.

She stood there, with a dozen eggs locked and loaded, as the door creaked open. “Ed io compro le uova per nutrirti per scuola! eh?! EH?!!” (And I buy you eggs to give you nutrition for school!) She launched an egg at him – splat! – and kept yelling, rapid-firing – splat! splat! – until the entire dozen was broken. When she finally ran out of other things to throw at him both the walls and my father were dripping with yolk.

A moment of silence for the pounds of gnocchi that were sacrificed that day.

I thought of this story as I walked up the cobblestone hill to the door of the house where my father grew up, this past August. I’d never been to Italy before, though my father goes each summer, and it was time I took this trip with him to see it all for myself. 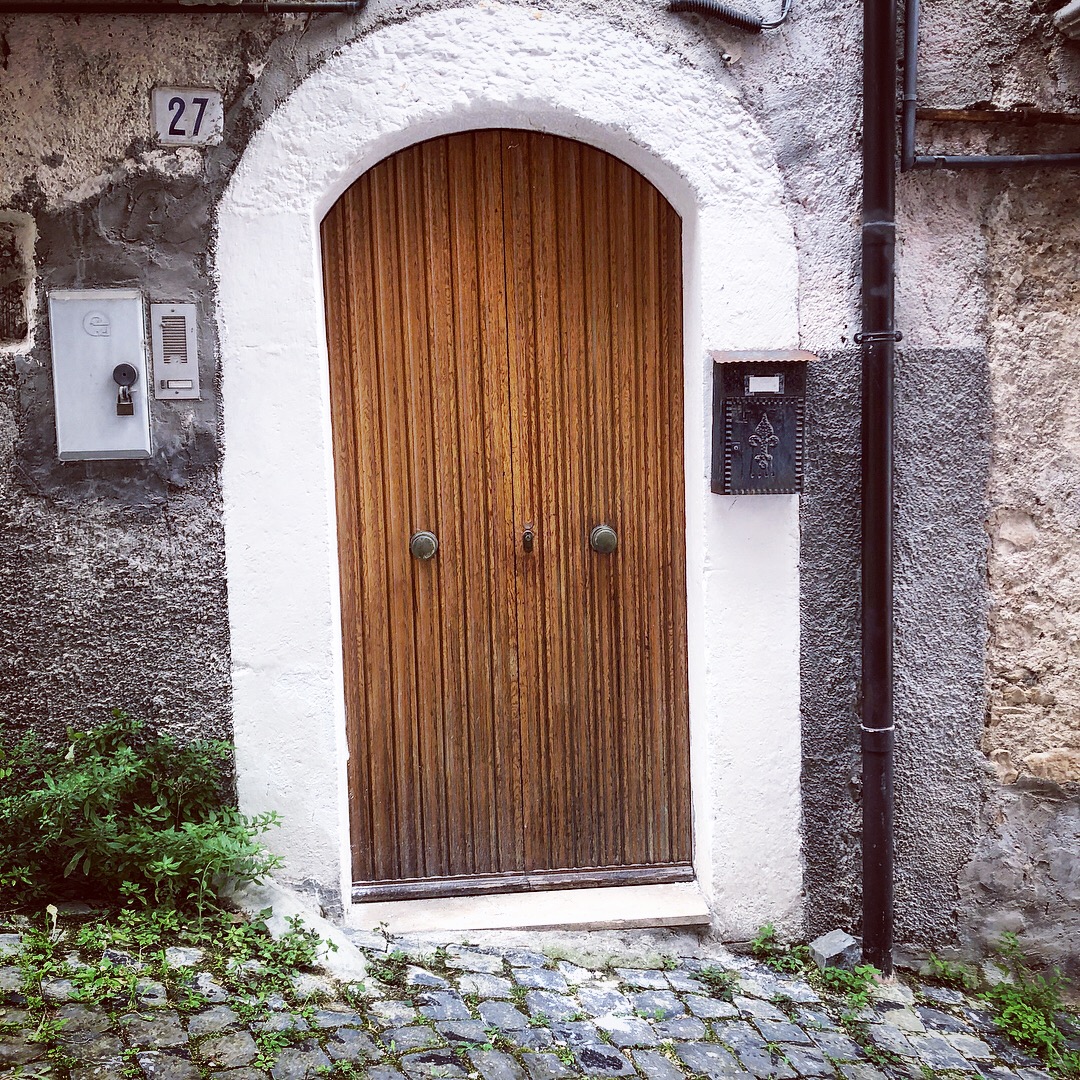 I think of my Nonna Tina all the time. She passed away when I was eight years old; she didn’t speak much English, and we weren’t taught Italian as kids, but regardless of the language barrier you still felt a warmth from her and knew she loved you. Her favorite way to show this was through the impossible amount of food she could produce from her tiny kitchen in the Bronx.

As I move about my day, encountering people, situations, and moments with my children, I find myself wondering: how would she handle this? Would she approve of my parenting? What if she were alive right now, raising children – how would she adapt to this modern lifestyle? What would her Amazon prime cart look like?

You may have noticed my absence here, partly due to this season of life, but also because I’ve been struggling. It began building after our son was born, and from that point, there was a slow and steady accumulation of anxiety, stress, and eventually, burnout, followed by a bout of insomnia.

Especially throughout this time, I thought a lot about my Nonna Tina and the sacrifices she made. She buried her first two children, one at sixteen, the other as a baby. She cared for my Nonno’s elderly parents who were sick and disabled, living upstairs. She raised her remaining three children – my father, his brother, and sister – while my Nonno was living in Venezuela for 11 years. And then, after declaring he was going to America, she said the Italian equivalent of you bet your ass we’ll meet you there, and put three kids on a boat to sail through Ellis Island.

I look at my life, and wonder: what did I do to deserve all of this? I am reminded of something said by Maya Angelou: “Your crown has been bought and paid for. Put it on your head and wear it.” When you fully understand this quote you know it doesn’t mean be a princess, or prince. It means you graciously acknowledge all of your abundance, privilege, and resources and live a full, grateful life, and you do all you can to help others and make your ancestors proud.

I don’t know what I was thinking, buying this solo ticket to Italy. I’m a terrible flier; I white-knuckle a flight from Charlotte to New York, and here I am flying internationally, alone? Everyone who knows me well was banking on the fact I’d back out, which is probably why Greg agreed to wrangle the kids for a week in the first place. But there I was, headed to meet my father and sister, who were flying in from NY. This flight was an enormous feat for me. I had a pill in my bag for safe-keeping that is still sitting in my medicine cabinet; simply knowing it was there worked well enough for me on both flights.

As we stood in the heart of Rome, taking it all in – the beauty and the history, interspersed with graffiti and tourism – I asked my father: “So, where should we go first?” To which he replied: “You’re asking me? I’ve only been to Rome once in my life.” To be fair, I can relate. When people hear you’re from New York they assume you’ll be their tour guide, and although I lived there most of my life, I’ve never been to the Empire State Building.

We hit all of the tourist stops: St. Peter’s Basilica, the Vatican Museum, Sistine Chapel, Colosseum. I say ‘we,’ meaning us and the 30,000 other tourists crammed inside the hallways, pushing and shoving. “This is not a tour, this is torture,” cracked my dad, in his thick accent, to which an Irish woman nearby found absolutely hysterical, and we laughed until we were able to break free from the crowds.

Then we took a three-hour bus ride to his tiny hometown of Introdacqua and met my aunt, uncle, and several of our cousins, where we attended the annual feast and basically ate until we all exploded.

I got to see the marching band my father played in while growing up, and heard the stories of when he’d travel with them each summer. The entire band would sleep in churches as they moved from city to city, and he almost chokes as he recalls the story of the night they snuck out, took down a statue, and tucked it under the covers to play a joke on the music teacher. I think of my son’s mischief and shenanigans at the ripe young age of three, and it’s all beginning to make sense.

We visited the cemetery where my father’s two oldest siblings were buried. There they don’t have tombstones, but marble plaques on a wall; on it, a beautiful photo etched in remembrance. I could see my father in his brother’s eyes, even at sixteen. My instinct was to take a photo of the plaque, (because isn’t that what our instincts are for everything these days?) but I stopped myself because it didn’t feel right. “Well, take a photo,” said my dad, as if reading my mind. I reluctantly raised my phone, and when I pressed the button, my phone flashed white, then black, and powered down. I let it be.

I spent the rest of my time in Italy in Introdacqua. When it was time to leave I got a lovely ride back to Rome from my father’s friend who spoke no English and drove like Mario Andretti down the windy mountain roads. The downside was that I feared for my life; the upside, it was a great warm-up for the flight home.

We stopped halfway at a gas station. “What are we doing here?” I asked. “Getting breakfast,” said my father. At a gas station? We walked inside to find a full espresso bar surrounded by just-baked cornettos, fresh-squeezed orange juice, and construction workers laughing while drinking creamy cappuccinos. If I needed a good way to sum up the difference between America and Italy, this was it.

I landed back in NC, right in time for my son’s 3rd birthday and the start of kindergarten and pre-K for my kids. I can still smell like the fresh mountain air of Introdacqua in some of my summer clothes, and though I won’t wear them or wash them, I open and close my dresser drawers often just to see how long I can savor the smell.

I’m working each day: to better care for myself, my family, my work. Curating the energy I let into my world and being extra conscious of the energy I’m putting out. Trying to parent in this way, with grace and humility, and the reminder of just how little they are.

I will encourage my children to go, wear their crown, and don’t look back. But if they misbehave, I can’t promise I won’t pelt them with a few farm-fresh eggs, just so they remember their roots.

Love reading your post, Italy is in our souls . We love America, but it’s our pleasure and duty to learn what made us who we are. My every being craves Italy and I go every other year or so. Expouse your children to it, learn the language even if you rarely use it. It’s all part of your crown.
From one First Generation Italian American to another.

I love that you go back so frequently! My husband and I were just discussing going and bringing the kids. If not this summer, next, for sure, when they are a bit older. I agree with you! I’d love to say for a few weeks and really get immersed there. Thank you for reading my post! <3

I love that you go back so frequently! My husband and I were just discussing going and bringing the kids. If not this summer, next, for sure, when they are a bit older. I agree with you! I’d love to stay for a few weeks and really get immersed there. Thank you for reading my post! <3