They had sent us home with the costume – a little jingle bell tutu skirt and matching hair tie – at the end of her class last week, and even though Miss P loved it and wanted to wear it all day and sleep with it at night, I had to hide it. This was mainly because the sequined jewels kept falling off and I didn’t want it to get ruined, and also because Ciro monster has a habit of putting everything in his mouth these days and I didn’t want him choking on Christmas sparkles. I’m festive and all, but not so much that I need my baby to poop glitter. But it would be fine, because I would keep the tutu safe in my closet until the morning of the recital.

In the week leading up to the recital I thought about how it would all go down: I would get us all ready early enough so that we wouldn’t be rushing around. I’d carefully do Miss P’s hair in an adorable little bun, and maybe even use some hairspray so that it wouldn’t get in her eyes while dancing. My mom got her a new pair of ballet slippers, which I’d tucked into her dance bag from the night before so that we wouldn’t forget them.

I’d get us all out of the house in time to drive uptown, park, get into the auditorium early enough to find a good seat to take a video. I even planned what outfit I would wear so I wouldn’t have to put thought into getting myself ready that morning and could just focus on the kids, which, as any parent knows, the only way you are looking halfway decent and not like you crawled out of a dumpster (smell and everything) is to mentally plan from days ahead. I was on the right path.

Fast forward to yesterday morning, about an hour before we had to leave for the recital, when I realized the tutu was lost. How could this be? Where the heck was it?! No. NO. This can’t be happening. I began running around the upstairs of our home, in and out of the bedrooms, tearing apart closets and drawers in search of this tutu. In the midst of this running around I realized the sweater I picked out for myself was horribly uncomfortable, and the strapless bra I needed to wear with it that refused to stay in place was making me ragey. I made a mental note while ripping through drawers to take this itchy godforsaken sweater off before we left the house, of course after I found the tutu.

I yelled out again to Penelope:

“Sweetheart, are you sure you didn’t see the tutu?”

Did I seriously hide the thing so well that even I couldn’t find it? Damn, I’m getting good. Probably also mentally unstable, but I’m trying to see the glass half-full these days.

I glanced at the clock. We were already running behind. If I wanted to get there in time we needed to leave rightnow. My daughter takes dance with a friend, and it just so happens her friend’s mom and I are great friends, too. So I texted her what was happening and because she is amazing and I’m so lucky to have friends in my life who have my back, and because she has her shit together and got to the recital early enough, she began scouting for an extra skirt for us.

Once we got Uptown Greg dropped me and Penelope off in front of the building so that I could get her backstage and grab us some seats, while he took Ciro to find parking. They’d meet us inside.

As we ran through the halls hand-in-hand in a mad dash to the backstage door, Penelope said, “Don’t worry mama! If they don’t have my skirt it’s OK. I don’t need one!” This kid is amazing. And it made it that much better because I never did get to change out of that sweater and by now my strapless bra had fallen down my waist and it looked like I had four boobs.

My incredible lifesaver of a friend met me in the lobby and said that we were still on time, and they had an extra skirt for Penelope. We rushed up to the backstage door and were greeted by one of her teachers.

“Hi! Do you have her ballet slippers?”

My face dropped. Yes, I did have her slippers. They were in her ballet bag, which was tucked safely in the trunk of my car that my husband was currently parking FOUR BLOCKS AWAY.

“It’s OK, we’ll just have your child sift through that bin over there, the one filled with the tears of degenerate mothers. Maybe she’ll find a pair at the bottom,” is what she said with her eyes.

“It’s OK,” said my friend, “let’s just fix her hair and get her backstage.”

I glanced at Penelope who, after all this running around, looked like a toddler version of Diana Ross. I pulled her hair into the best top knot I could muster up, and while doing so I noticed some of the other moms backstage: makeup perfectly done. Coaching their daughters. Pristine outfits and game faces on. One mom even had her hair coiffed so meticulously that I think she had one of those bumper things underneath to give the back of her ponytail a lift, and I’m not knocking her, I’m  simply in awe. How does one have her shit so straight that she can pull herself together like that? I’m over here with my bra around my waist trying to tame my daughter’s wild mane while wondering if she’ll be performing barefoot.

I gave Penelope a kiss and wished her good luck as she ran slipper-less backstage. She was totally happy and could not care any less if she tried, which was the only thing making me feel slightly better about the whole situation.

I made my way to the lobby and found Greg, then grabbed a bouquet of flowers that we could give to Miss P after her performance and brought them to the register.

“I’m sorry what? I must’ve blacked out. I thought you said you were charging me $10 for those three wilted carnations.”

I’m not going to lie to you. I considered tearing off Ciro’s diaper and holding him out rear-first so that he could fire Christmas sparkles all over this display of highway robbery. But we needed to get inside because at this point if we missed the performance I would crawl into whatever black hole that tutu was sitting in and never come out, so we paid for the flowers and in we went.

You guys, she was so stinking cute up there, I could have cried. They danced to Michael Buble’s “Holly Jolly Christmas”, her little slipper-less feet hopping and twirling, a huge beaming smile on her face, and it was so adorable that I almost couldn’t take it. Not a care in the world that her mom lost her tutu and forgot her slippers and didn’t coif her hair, and in that moment I breathed a sigh of relief because none of that stuff mattered to her anyway. She knows I tried, and she is happy.

We got home and put the kids down for a nap, and Greg went off to work. I finally sat down and took a deep breath (after I ripped off that ridiculously itchy sweater, of course). It was a shit-show, but we did it.

After Penelope woke up from her nap, she came over to me with her bed-head and sleepy voice, and said, “Oh hey, mommy! I know where the tutu is.”

“Nope! The other one!” she proudly exclaimed, as she casually walked over to her brother’s book case, pulled one of her old lunch boxes off of a shelf, unzipped it, and removed the skirt from inside. I sat there blinking for what felt like an hour, then we both began laughing like total lunatics.

Have a Holly, Jolly Christmas. It really is the best time of the year. 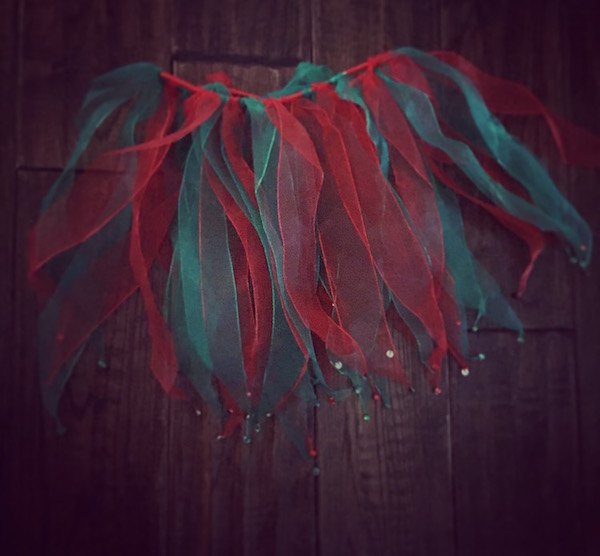 Thanks! 🙂 Haha…She is a champ!

HAHA! So you found it??? Too friggin funny that baby <3

Yep! You know I didn’t put it in her lunch box! She knew where it was the whole time – stinker…