Converting Your Toddler to a Big Bed. (The Struggle is Real.) 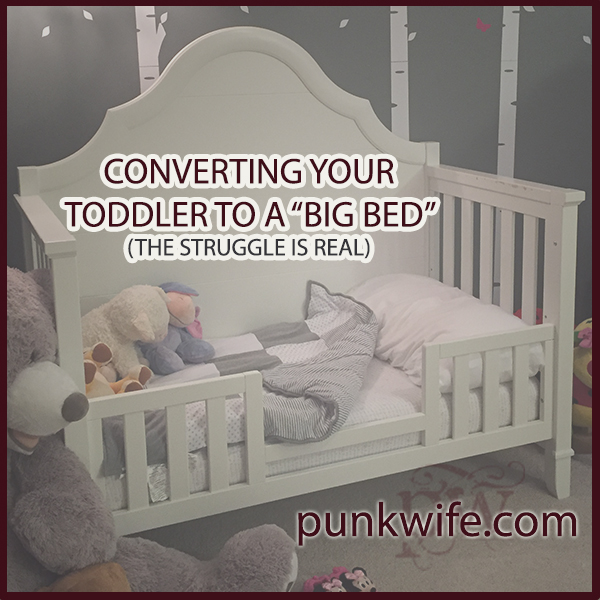 Gather ’round the campfire as I tell you the frightening tale of two parents who made the dumbest decision ever. One that involves a very important and delicate subject: sleep.

All was great in our home as far as sleep went. Penelope was always a rock star sleeper, and Ciro followed suit, logging in twelve hours of uninterrupted sleep pretty much every night. Don’t go hating me just yet. It all goes downhill from here.

Like, waaaaay downhill. As in “Jack fell down and bumped his crown, then Jill rolled down, then the bucket slammed them in the head, then a bear came along and ate them and their bucket” kind of downhill. And it was all brought on by that dumb decision we made: to transition Penelope from her crib to the toddler bed.

The details of why we thought this was a smart idea aren’t important, but the rundown was this: she’s almost three, she’s always done great with change, and she’s been an excellent sleeper. So why not give her a proper bed?

And you know what? It started out wonderfully. We removed the crib rail and put up the toddler bed rail, we showed her the bed, and her face lit up with a HUGE smile. She turned to us and hugged us while exclaiming: “Thank you!!!” before running to her bed and jumping under the covers. She loved it!

Her nap that day went fantastic. Better than fantastic, actually – when she woke up from her nap, she even went and got a book from her bookshelf and quietly read it in her bed while she waited for me. This child! She was amazing! I even took a photo of it. We were so proud.

We all know what pride does to us, don’t we?

Here’s what happened next: that night at bedtime, girlfriend lost.her.mind.

She got curious, so she came out of her room, and discovered that — wouldn’t you know it — there’s a whole world going on outside her door once bedtime happens. We’ll never know what really went on in her head but my guess is that she realized her new toddler superpower to get out of bed at will, open her door and find us – and the freedom was too much for her to take. I think it excited her, piqued her curiosity, and also scared the crap out of her, to the point where she didn’t want to go to bed anymore. Our easygoing girl – the one who anyone could put to bed, who would sleep all night long without a peep – did a giant 180 on her sleep routine.

The next day she was fighting going down for a nap, hard. Screaming, crying…it was ugly. She was already sleep-deprived from the night before, so that didn’t help. Against my gut I took someone’s advice, which was to stay with her just this one time, until she fell asleep.

Just this one time. 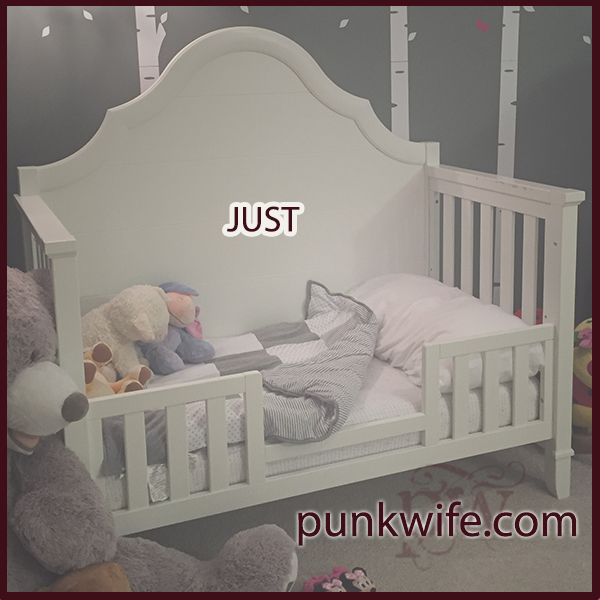 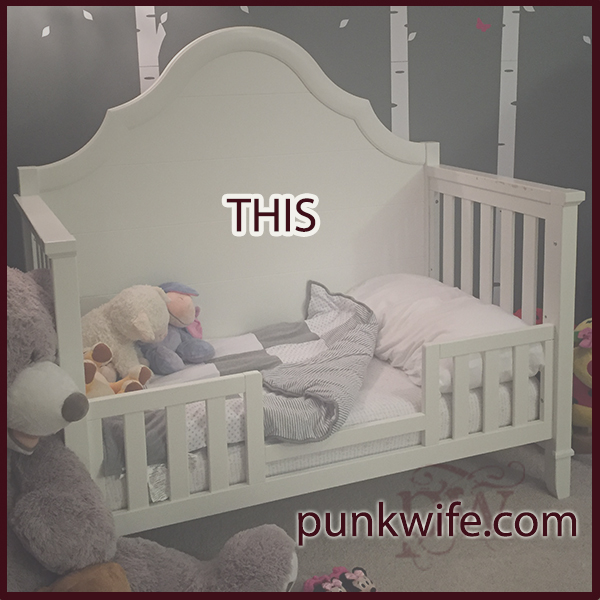 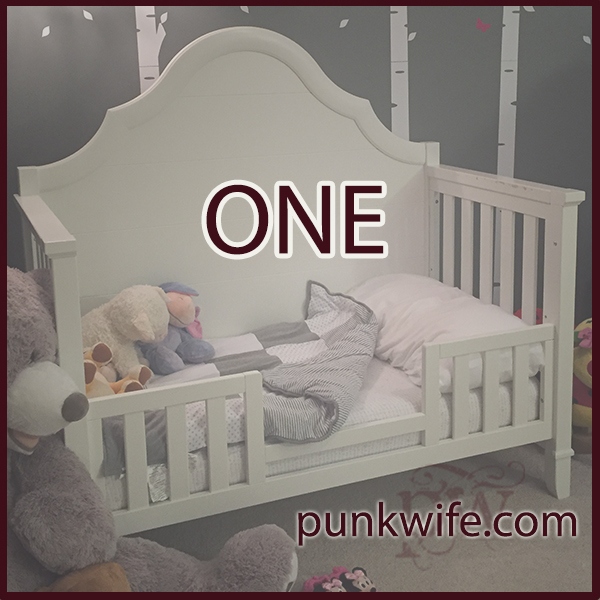 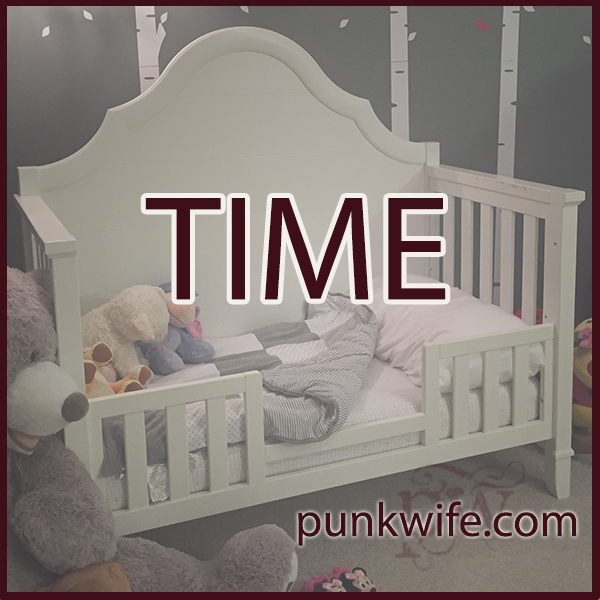 Only, anyone who has experienced a toddler knows that “just this one time” means you signed an oath in blood and animal crackers that you will do this forever and ever and ever.

Staying with her until she fell asleep achieved two very predictable things:

This was worse than the newborn stage for her or her brother. Every two hours, then sit with her for 45 minutes to an hour until she fell asleep again? All freaking night long?! Nope.

We obliged for a while, but eventually we started seeing stars and losing sanity. It got so bad that we actually had to take turns each night on who would get to sleep and who would have to man the door for when she woke up and came looking for us to put her back to bed.

We were losing our minds, so we aborted mission: we put the crib rail back up. We decided to lower her mattress all the way to the floor, so she couldn’t jump out even if she tried.

There’s nothing quite as jarring as being in a sound sleep at 1:30 in the morning, and suddenly hear a giant — THUD!!! — followed by the piercing screams of a wailing toddler. One busted lip and a bruised cheek later (plus several years undoubtedly knocked off of our lives), and we were back to the toddler bed. We couldn’t risk her hurting herself, and at this point, it didn’t even matter – she was getting out anyway.

Rock-bottom for us was the night she started waking Ciro up. That to me was the beginning of the end because I CAN’T HAVE THE TWO OF THEM WAKING EACH OTHER UP ALL NIGHT. Even just the thought of it makes me do strange things like WRITE IN ALL CAPS AND YELL AT YOU. I need to be functioning during the day, for everyone’s safety, and this shit was not working anymore.

So we took some steps. And dare I say it: We are finally – finally – at a place where we are back to sleeping pretty well. A place where I feel semi-functional enough to write about it and share with you what we did, just in case there is any chance this could help you, or just in case you want to point and laugh at our sheer stupidity and shenanigans.

I will add the GIANT CAVEAT that I can’t guarantee any of this will work for you, because who knows if it actually worked for us? Maybe in our case she just got tired and sad for us due to all of this trouble she saw us going through, and we just weren’t making it fun for her anymore. Maybe she was like, You know what? I feel bad for them. I’m over it. I think I want to just sleep tonight and let them get back to their boring lives after I go to bed, because I’d rather be sleeping than hang out with these tools.

But what I DO know, is that it got notably better after we made a few changes. Here they are (along with my rating of effectiveness for each one):

There. That’s all I got. We’re still not fully in the clear so I’m not going to jinx myself, but we are getting close, I can feel it. We have the expected wake-ups here and there but nothing as bad as it was. I’m not a sleep expert, just a tired parent, but I’ll end with the MOST important PSA we could pass along: WAIT AS LONG AS POSSIBLE TO TRANSITION YOUR CHILD OUT OF HIS OR HER CRIB. Keep the mattress on the lowest level if you have to, even lower it to the floor if you can. If your child is not jumping out, is sleeping well, and you like having somewhat of a life at night once your child goes to bed, then FOR THE LOVE OF GOD don’t try to fix what isn’t broken.

I took this giant loooong post to tell you the very important moral of the story: you know your child, and every kid is different, so wait until you know they are good and ready before doing anything. There are a bunch of signs that you can use to determine if your little one is ready to make the move but regardless, there is no need to rush anything. It’s too late for us but SAVE YOURSELVES.

Tell me: have you been in my situation? What did you do?